McDonald’s is 76 years old. And they’re not looking too bad, considering.

I have to admit I’ve never been much of a fan of their food, although the infamous “Happy Meal” remains one of the few staple meals my picky-eating son will consume. I tend to go with a coffee (hot or iced-frappe) which they do as well as any coffee house IMO.

However, I am a fan of the innovation in branding, communications messages and now more recently, technology, that McDonald’s has kept as a staple base of their global operations.

In fact one of our University PR assignments was to develop new tray-top liners for McDonald’s to promote their use of local farm produce. And that was back in 2002, before the organic-vegan-clean-eat movement even fully took off.

They are always one step ahead of the game, to be fair to them.

And they’ve had to be.

In the face of changing attitudes to fast food and changing consumer behaviours, the opening of a McDonald’s Innovation Centre in Silicon Valley didn’t surprise those of us who follow the brand from an industry point of view.

I didn’t realise how little of that innovation had made it’s way to Northern Irish shores though, until our trip to New Zealand back in March. I was as shocked/excited as the small person when we walked into a Christchurch McDonald’s to find a deli/McCafe counter separate from the food (resembling a fancy-pants coffee shop), touch-screen ordering, build-your-own-burger flip menus, free Wi-fi and little table top tablets that played games and told us the weather! 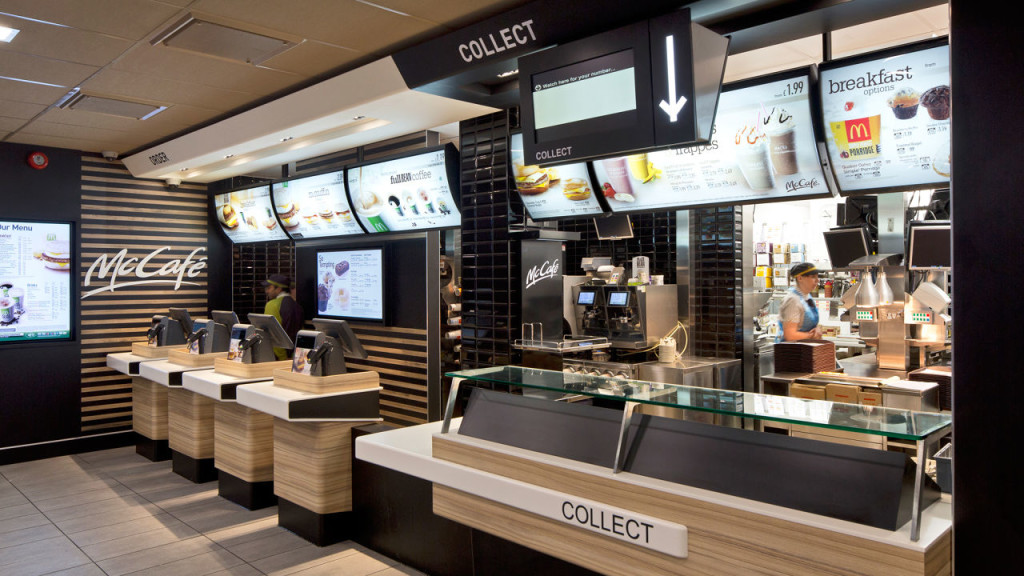 So I was glad to be invited to a special Behind-the-Scenes event at the new-improved Donegall Place restaurant in Belfast last night. It was closed for some four weeks for the construction revamp and its loss was felt, even by those of us who don’t usually frequent it.

In these changing consumer times, few things have remained constant on our High Street like the big “Golden Arches” sign at the corner of Donegall Place, Belfast.

I remember as a young child in the early 90s (it opened in 1992), we couldn’t afford to go to McDonald’s that often (sob story alert). Longingly I would look in the window at this cool, American diner-style place that rich kids hung out in. Even then it impacted on my sense of brand messaging. I wanted to be part of this.

My own son, like most modern children, has been able to recognise the McDonald’s branding since before he could speak. It was literally one of his first velcro symbols on his Autism visual schedule!

If you need any proof that McDonald’s live and breathe innovation, you need only Google News Search. Within just the previous few weeks you’ll find at least three new launches, including:

This 2-minute video from Fast Company is a really cool recap of McDonald’s marketing through the ages.

And clearly innovation pays off. Unlike most of our High Street names which have struggled to survive the Recession and eCommerce revolution, McDonald’s as a UK brand has bucked that trend, showing continued sales growth year-on-year since 2002.

McDonald’s have operated in Northern Ireland for 23 years and now have just shy of 30 outlets here. It may have taken a while for the latest digital innovations to reach us, but they’re not wasting any time rolling them out - with all NI stores aimed to complete by 2018.

However, the new store is more than just a lick of paint and some new light shades.

Myself, Jeff from Belfast Times and blogger Debs of SuperBusyMum, were first taken through the background to the store by franchise owner - and local businessman - Paul Connan.

This is the third time in his 14 year tenure that Paul has invested in a renovation of the city centre site. He is clearly most excited about this one because he understands the business benefits of the new technology.

With a career in management within the wider McDonald’s UK brand before becoming a franchise owner, Paul also recognises the peculiarities that make doing business here different. We’re the fussiest in the UK for example, with the biggest portion of personalised orders (40%!) The kiosk ordering system makes this much easier for the kitchen staff to get right.

We’re also a little behind other parts of the world when it comes to things like card payments. I know this because my husband is a Kiwi and carrying cash is really foreign to him! But even with our reluctance, the store already has a 20% usage rate for kiosk ordering versus counter ordering, which they feel is fairly good for a new system.

The introduction of touch-screen kiosks has more than changed the layout though, it has revolutionised how the business is run. And not in the way we might imagine.

Rather than reduce staff numbers, it has actually increased them, because the orders are made fresh, they have to be made faster. So more staff work on designated parts of the cooking system. Very unlike kitchen life for those of us who had Saturday jobs in the fast food sector, when you ran around like a mad thing making every element yourself and trying (usually failing) to time it all right.

We were taken into the kitchen in our snazzy new uniforms and (after washing our hands, of course) watched in awe as “Brendy” used both hands in a blur of burger-making-brilliance. We watched the meat patties being cooked for exactly 114 seconds on brand new (very expensive) grills. We even got to make our own meal - I opted for my usual McChicken Sandwich - it’s a lot harder than it looks! Especially in a busy kitchen when everyone else is working like a well-oiled machine.

Paul explained that they are keen to introduce as many new developments as they can to make the whole experience more enjoyable for people. From gourmet burgers to App ordering, McDonald’s are constantly working on new technology, but Paul maintains that it must be developed until it is fully reliable.

The staff laugh at their forced closure of the morning of July 12th - a Public Holiday with thousands in the city centre - when they had to explain to customers that because of “IT problems” they couldn’t open. I”m sure it wasn’t funny at the time.

During our tour, Paul shows us the monster piece of kit that is the McDonald’s iced drink machine. It took 5 years in development to get it to a place where it would work perfectly for them. And it does.

Compared to the long wait in any unnamed coffee shop while someone blitzes ice cubes in a blender and pours too much syrup in; the McCafe Iced machine does it all perfectly each time, in a matter of seconds. It even washes itself!

And when a new seasonal item comes on the drinks menu? They just plug the instructions in via USB. Pretty groovy.

I’m as guilty as the next person of dismissing “big brands” as uncaring.

What I forget, like many people, is that McDonald’s may be a global corporation but it is owned, and staffed, by local people.

And those local people care about the communities they’re working in.

Business Manager Stewart McFarland talked passionately about their work with the local homeless charity to feed people on the streets, about how they raised £8,000 on the recent charity cycle event Lap The Lough and their sponsorship of grass roots football and Tidy NI.

When I asked him about Autism initiatives, Stewart shared a lovely store about his time at the Lurgan branch where a woman regularly came to buy lots of their miniature milk bottles as they were the only ones her son would drink from. And the staff even recognised the difficulties for sensory-challenged children when it comes to simple things, like balloons popping.

Their passion was a pleasant surprise.

This isn’t just a CSR tick-box exercise for these guys. The management got most excited when given the chance to talk about the “Trust” part of their business plan than any other operational, sales, or technical aspect.

I really appreciated that. And I may still not be the most regular of customers (albeit, I don’t eat at any of their competitors either!) but I will certainly pay a bit more attention, and indeed respect, to the staff and their processes next time I take the small boy through his favourite drive-through!

Thanks  to Aiken PR and McDonald’s for sponsoring our expenses to attend this event. I truly didn’t expect to be treated so well, to learn so much or indeed, to see so much authenticity and local passion behind the famous logo.

I may be emigrating from these shores but I wish the Belfast team all the very best for the future. I expect to see them in the same spot I always have on my return trips, like my steady beacon in an ever-changing High Street!